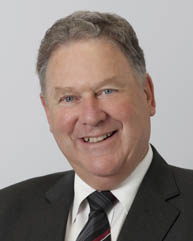 Bryan Jackson was born in Wellington but spent his early years in Auckland. At age 17 he, with his family returned to  Wellington. Schooling finished, he joined the Royal Insurance Company. Insurance wasn't for him, but he did meet his future wife Heather there, so it wasn't all bad by any means!.

From Insurance to Construction with the Williams Group. Made redundant some six years later, he joined Expandite as a Technical Sales Representative. He rose at Expandite to become the National Director of Sales and Marketing, but the call to own his own business was too strong and in 1973 Bryan, together with partner Jim Sherwin, started the Auto Point Group which consisted of Motor Vehicle Service outlets, Service Stations and Dealerships, the most well known being King Toyota.

Jim and Bryan went (very amicably) their separate ways in 1994, Bryan took over the Auto Point Group and Jim the Accountancy Practice, Sherwin Chan and Walshe, which was also part of the Group.

For Bryan, from an early time, Directorships were of great interest and he has held many Board positions - most noticeably as Chairman of Hutt Valley Health, Vehicle Testing NZ, Transit NZ, Pencarrow Group and remains as Chairman or Director of several other companies.

In 2005 he sold King Toyota which is now part of the Rutherford and Bond Group. The properties were retained and his Company, Jaclan Investments owns and leases these.

Bryan is looking forward to working with the Commercial Operations at the Trust, and subsidiaries.